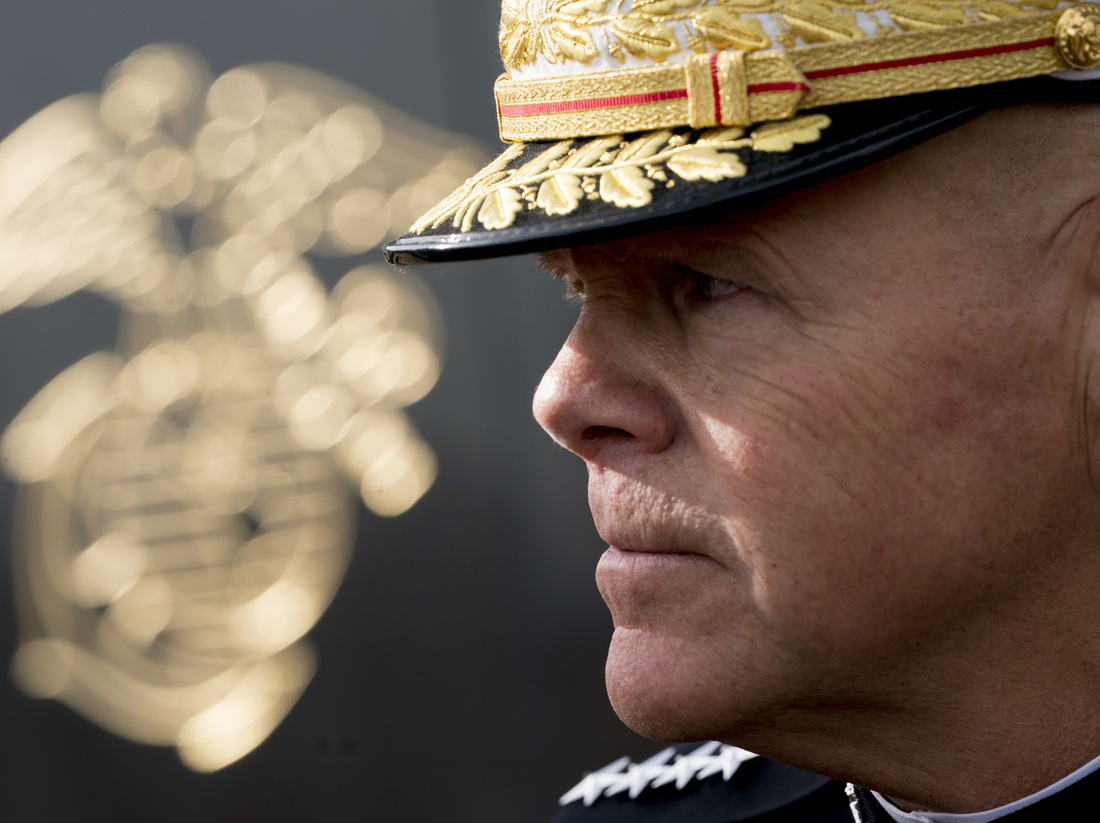 Commandant of the Marine Corps Gen. Robert B. Neller at the U.S. Marine Corps War Memorial in Arlington, Va., in 2017. 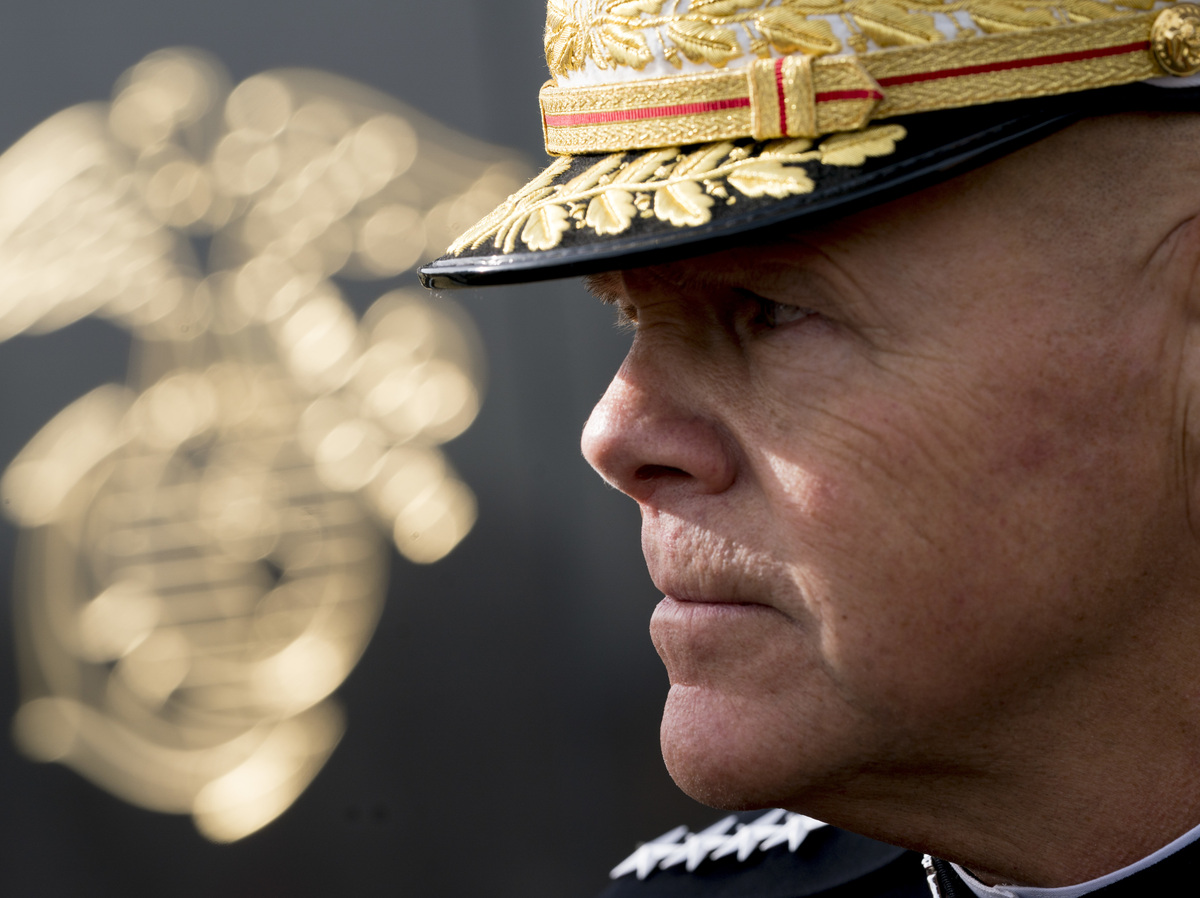 Commandant of the Marine Corps Gen. Robert B. Neller at the U.S. Marine Corps War Memorial in Arlington, Va., in 2017.

Why did Bob Neller join the Marines?

“I needed a job,” the top Marine officer says nonchalantly.

He went to Officer Candidate School the summer before his senior year at the University of Virginia with the intention of then going to law school.

“The law school thing didn’t work out,” he recalls, “and I wanted to get married, and my parents were getting divorced, and I didn’t have any money. And the Marine Corps said, ‘Hey come do this for 2 1/2 years.’ And I said, ‘Sure.’ “

It stretched to 44 years.

“Stuff happens,” says Neller, who could be a poster boy for the Corps, with his bulldog scowl and compact frame. We sit in the Pentagon’s Marine dining room, decorated with glass cases full of swords, epaulets and the occasional medal.

For the past four years, Neller has been the Marine Corps commandant, the officer charged with equipping, training and maintaining a ready service, as well as being a member of the Joint Chiefs of Staff. He’ll step down this fall after a career that took him from Somalia and Panama to Belgium, Iraq and finally to the Pentagon.

During his tenure, Marines — and the Army — accepted women into ground combat roles. The Army is more than 2.5 times the size of the Marine Corps, but still the numbers are lopsided.

The Army counts 400 female officers and enlisted troops in the infantry, as well as 28 female graduates from Army Ranger School.

The Marines say they have 31 graduates of infantry training and fewer than a handful of female infantry officers.

“The numbers are the numbers,” says Neller. “The Congress has told us to have gender-neutral standards for all [military] occupational specialties [the military’s term for a specific job]. If you want to compete for any MOS, man or woman, you compete, and if you meet the standard you earn the MOS.”

But is Neller surprised by the low numbers?

“No. I’m not,” he says. “We knew this. We testified to this. We’ve told everybody we knew the numbers would be small. Because we didn’t believe there were many women that were interested in doing this.”

In 2015, when the Pentagon was considering opening up ground combat jobs — armor, artillery and infantry — to women, NPR visited the Marine Corps Air Ground Combat Center at Twentynine Palms, Calif.

It was there, in the Mojave Desert, that an experimental battalion of men and women were training together to help the Marines better understand how women would perform.

Both men and women had to perform the same tasks: Carry a pack of more than 100 pounds, climb over barriers, head out on patrol, drop and shoot at targets.

After the first week, nearly half of the women in the infantry unit dropped out — a much higher dropout rate than for their male counterparts. About a dozen women remained.

Only one of the women dropped out while in the Mojave Desert; the rest dropped out because of injuries — mostly hip and leg fractures — they received at Camp Lejeune in North Carolina while getting ready for the live-fire event in the desert.

Those stories do not surprise Neller.

Listen: “The biology and genetics are what they are”

“Look, we know the human being can bear a load about 60% of their body weight,” he says. “It doesn’t matter if you’re a man or a woman. Being physically large gives you an advantage when you have to carry a heavy load. The biology and genetics are what they are. And there are always going to be people that are outliers who through their determination or whatever are going to be able to do these things.”

Neller quickly points out that there are many more women in the other ground combat jobs — artillery, engineers, light armored reconnaissance, air defense, tanks. 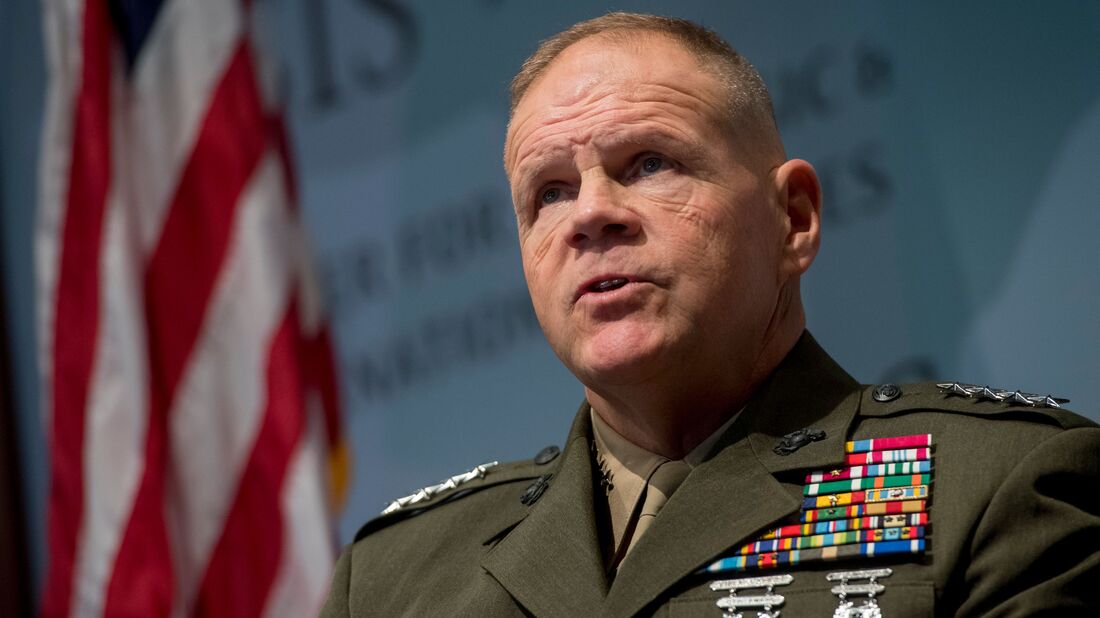 Neller speaks during a discussion at the Center for Strategic and International Studies in Washington, D.C., earlier this year. 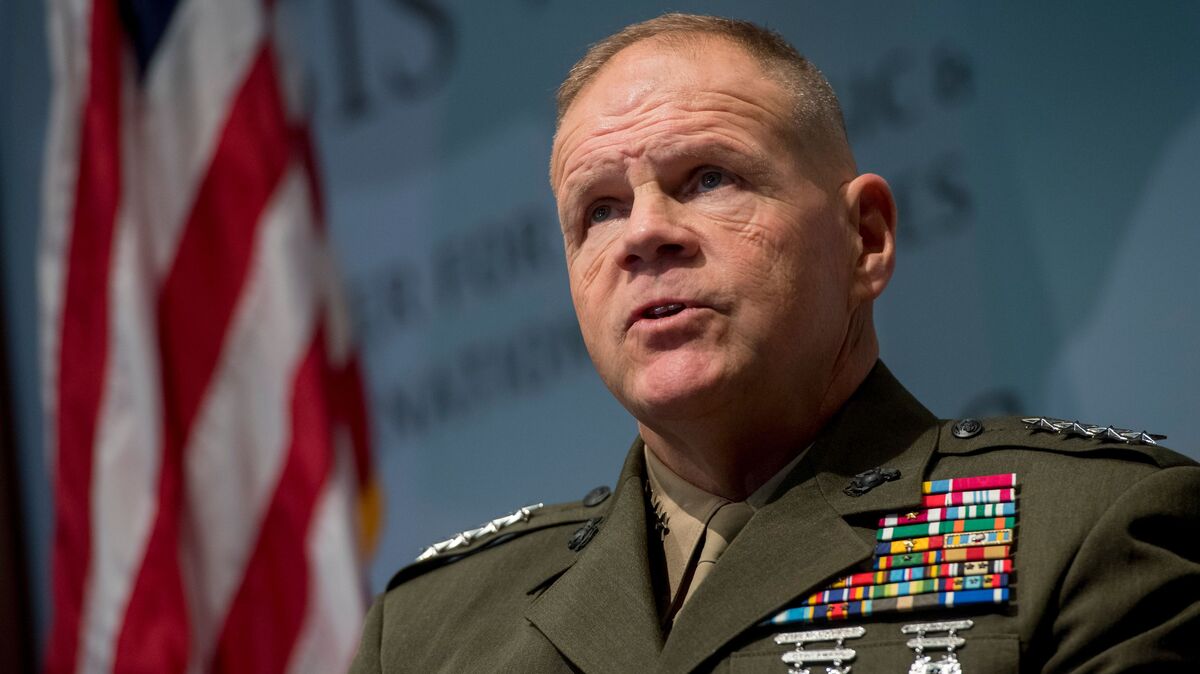 Neller speaks during a discussion at the Center for Strategic and International Studies in Washington, D.C., earlier this year.

“The bigger stat is: Right now in the divisions of the Marine Corps — the three active-duty divisions — there’s over 800 women in those divisions in a variety of MOSs,” Neller says. “That wasn’t the case several years ago.”

The largest number of women — at least 211 at last count — are in artillery units, Neller says.

Female Marines, besides moving into ground combat jobs, increasingly are dealing with sexual assault. Last month, a Pentagon report showed a 20% increase in anonymous sexual assault reports in the Marine Corps from the last report in 2016. It was the highest increase among all the services.

Listen: “The fact is … the numbers are going up”

At the time, Neller said in a statement: “We cannot truly be loyal to our Nation without first being loyal to each other. All Marines must be involved in preventing and addressing sexual assault and harassment. There is no room in the Marine Corps for either of these behaviors.”

I asked Neller about the increased number in the Pentagon report.

“The fact is, based on our reporting, and I believe it’s underreported, the numbers are going up,” he says. “I would have thought after talking about this for the last five or six years that we would have seen a decline in the behavior.”

The report also said that those units — in all the services — with a prevalence of sexual harassment, gender discrimination or workplace hostility have a greater chance of sexual assault.

“I know where [the allegations] come from just like I know where suicide ideations and suicide attempts come from. I know where there’s issues maybe with safety and other things. And so we go through the chain of command and say, ‘Hey, you need to pay attention to these folks and find out what’s going on. Why is this unit and not that unit, who seem to be in a similar geographic location, why are they having problems and the other one’s not?’ “

And what are you learning?

“They’re all different. It could be command climate. Sometimes it’s other things. People are digging into it, they’re trying. Look, the thing I have to remind myself everyday is there’s 186,000 Marines out there. And the great, great, great majority of them are doing their job, they’re treating each other with dignity and respect. They’re operationally competent, they’re physically fit, they’re looking out for each other. But we have those that either struggle with whatever they’re struggling with and so we’ve got to make sure that we’re paying attention to them. Any commander will tell you they spend the great majority of their time with a small percent of the force. Because you take for granted that everybody else who’s earned the title Marine is going to uphold our values. If it doesn’t make us better, I’m interested in getting rid of it.”

“Can I do that? No. That’s undue command influence because there could be a violation.”

Meaning Neller, as the top Marine officer, and perhaps ultimately deciding someone’s fate, cannot inject himself into a disciplinary or criminal case and appear to influence the outcome.

Neller adds, “I have confidence in the commanders … they’re aware of what I’m aware of. They see the same data I see. If there’s a concern on their part, if there’s a spike of any sort of behavior that we’re concerned about, that they’re going down there and finding out what’s going on.”

Looking back on his tenure, Neller says he’s proud of the Marines and their families, proud that there are still young men and women out there that “want a challenge and want to work hard to earn the title Marine.”

“Recruiting’s tough. Recruiting’s always been tough because we have high standards,” he says. The Marines made their annual recruiting goal for last year — unlike the Army, which was about 6,000 recruits short.

“It’s not getting any easier. The number of qualified young men and women out there in the nation is right around 30% or less.” That’s because about 7 of 10 young people can’t meet military qualifications, because of physical problems, lack of education or criminal records.

What’s the future look like for the Marine Corps?

“Our environment’s changed, so we have to adjust and anticipate what’s coming in the future,” he says. “I think we’re back to a period of great power competition.”

Listen: “We have to adjust”

That means the great powers of Russia and China, a concern that was laid out last year in the National Defense Strategy, in what it termed “long term strategic competition” with those countries.

“In the last 10, 15 years though we didn’t talk about the Russians or the Chinese,” Neller says. “Now we talk about them all the time.”

Neller says the threats from those countries include longer range missiles and other weapons, drones and cyberattacks.

“I believe that whoever can maintain their network and deny the other person theirs may win the whole thing without having to fight,” he says.

Listen: Beefing up the cyber force

So the Marines are beefing up their cyber force, taking part in large exercises that include tanks, aircraft and artillery, the kind of weapons needed to fight a large war with another state.

What does Neller worry about?

Listen: “You try to anticipate what you think is going to happen”

“You worry about, are we able to change fast enough? Are we going to have reliable, consistent funding to increase the readiness and the capability of the force? Are we still going to be able to recruit?”

By this fall, those questions will have to be addressed by the next commandant.